What Exactly Is 5G?
Understand complete technology, benefits, and challenges with 5 points. 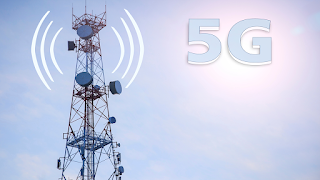 But in the midst of a discussion about 5G, many people should be curious about what 5G technology is and how it will make room for the existing technology. So let’s try to explain it to you.

Let me tell you – there will be some difficult words in some places, but you have to be patient. I will try my best to explain it to you.

5G is the fifth generation of mobile networks. Think of 5G in such a way that 100 times the speed of a 4G network. Like 4G, 5G is also based on the same head of network communication.

Fifth-generation wireless technology is capable of delivering ultra-low latency (signal speed between your phone and tower) and multi-Gbps data speed.

It is a software-based network, designed to improve the speed and performance of wireless networks. This technology also increases the amount of data, which can be transmitted over a wireless network.

5G technology can work on a “sub-6 band”, whose frequencies are usually between 3Ghz-6Ghz. Most existing devices such as mobiles, tablets, and laptops also operate at this frequency, its accessibility is very high.

However, due to the large volume in the system, researchers are now considering using above 6 GHz. They are designed to operate on the 24 GHz-300 GHz spectrum which is considered a high bandwidth. Experts also call it the millimeter wave.

Millimeter-wave 5G receives a lot of data, which makes data transfer possible at speeds of up to 1 GB per second. Such technologies are currently used by telecommunications operators such as Verizon and AT&T in the US.

The second foundation of 5G technology is speed marketing. The millimeter-wave has a problem with the range, which is paid for by speed sales. Since the mm-wave does not work by blocking, a large number of small cell towers have been installed throughout the area to transmit the signal from the large cell tower. These tiny cells are placed a short distance away from the traditional tower so that users can access the 5G signal without interruption.

The next foundation of 5G technology is the size of MIMO, that is, multitasking and multi-output technology. Larger cell towers are used to control traffic using this method. A standard cell tower that provides a 4G network comes with 12 horns that capture mobile traffic in that area.

MIMO can support up to 100 horns at a time which increases the volume of the tower where there is a lot of traffic. With the help of this technology, it helps to transmit 5G signals easily.

Beamforming is a technology that can continue to monitor multiple sources of frequency and when one signal is blocked, it switches to another solid and high tower. This ensures that certain data goes to a specific directory.

A complete duplex is a technology that helps transmit and receive data simultaneously on the same frequency band. This type of technology is used in house phones and in short-wave radio broadcasts. It is like a two-way street, sending equal traffic from both sides.

Imagine downloading a full HD movie in less than three seconds. 5G network will be much faster. According to Qualcomm, 5G is capable of delivering up to 20 GB per second in terms of traffic capacity and network efficiency.

And with wavelength, you can get a 1ms delay which helps to establish faster connections and reduce network traffic.

Qualcomm President Cristiano Amon also believes that the 5G network will provide such speed, which can detect unpleasant reality in real-time. This will also help in the creation of hardware that works on Augmented Reality.

This technology will be the basis for virtual reality, automated driving, and the Internet of Things. This will not only improve your smartphone usage experience but will also help with medical, infrastructure, and production.

Bringing in 5G technology will be more expensive. Network operators will have to remove the existing system as it requires higher frequencies than 3.5Ghz which is a larger bandwidth than used in 3G or 4G.

The maximum bandwidth of the sub-6 GHz spectrum is also limited, so its speed is less than that of a millimeter-wave.

In addition, the millimeter-wave works better over short distances and may not work in a blockade. It can also absorb trees even during the rainy season, which means you will need a lot of hardware to make 5G practical.

There has been an increase in 5G but not in line with people’s expectations. According to the GSMA Intelligence report, or below the current rate, 5G will not be able to surpass 3G and 4G until 2025.

However, Qualcomm President Cristiano Amon believes the number of 5G smartphones will be 750 million by 2022 and 5G connections should be 1 billion by 2023. It took more than two years for 4G to reach this figure.

Apart from this, there is the issue of security and privacy with 5G technology, which will only be known after many uses.

5G works better at wavelengths above 6 GHz. Older technologies such as 2G, 3G, and 4G also operate on wireless bands ranging from between 3.5Ghz to 6Ghz.

According to a report by Android Central – 5G can work with 4G, but due to the use of the additional 3Ghz-6Ghz spectrum, researchers are experimenting with short wavelengths between 30 GHz-300 Ghz over 6Ghz.

Other technologies such as 5G NR (New Radio) and 5Ge (AT&T affiliated with LTE Advanced Network) work on 4G networks, but they are not as fast as mm waves, meaning a maximum speed of 1 Gbps. You will need to install the new hardware.