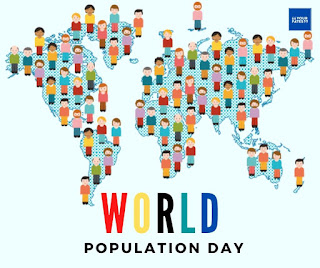 World Population Day is observed annually on July 11 year to highlight the problems of overpopulation and raise awareness about the effects of overpopulation on the environment and development.
There has been a rapid increase in the world population over the last few decades and continuous population growth can give rise to many other problems. Thus, to increase people’s awareness of various population issues such as the importance of family planning, gender equality, poverty, maternal health, and human rights, World population day is observed every year.
World Population Day 2021: History
The first World Population Day was marked on July 11, 1989, and today, in 2020, the world will mark its 31st Population Day.
World Population Day was established by the Governing Council of the United Nations Development Programme in 1989. It was inspired by the public interest in Five Billion Day, the approximate date on which the world’s population reached five billion people on July 11, 1987.
World Population Day 2021: Theme
Every year there is a specific theme for World Population Day and the theme of World Population Day 2021 amid the pandemic is “Rights and choices are the answer: Whether baby boom or bust, the solution to shifting fertility rates lies in prioritizing the reproductive health and rights of all people.”
Every year, on this day, various events and activities are organized, mostly in schools and colleges like seminar discussions, educational information sessions, and essay competitions to draw attention to the issues of the growing population.
WORLD POPULATION DAY 2021: QUOTES
“Almost half of the population of the world lives in rural regions and mostly in a state of poverty. Such inequalities in human development have been one of the primary reasons for unrest and, in some parts of the world, even violence” -A P J Abdul Kalam
“As a woman leader, I thought I brought a different kind of leadership. I was interested in women’s issues, in bringing down the population growth rate as a woman, I entered politics with an additional dimension – that of a mother.” -Benazir Bhutto
“Rapid population growth and technological innovation, combined with our lack of understanding about how the natural systems of which we are a part work, have created a mess.” -David Suzuki
“Yet food is something that is taken for granted by most world leaders despite the fact that more than half of the population of the world is hungry. ” -Norman Borlaug
“When the family is small, whatever little they have they are able to share. There is peace” Philip Njuguna
“Our human population continues to expand at such a scary rate – it’s unbelievable.” -Bindi Irwin
“Population growth is the primary source of environmental damage.” -Jacques Yves Cousteau
The day was suggested by Dr. K.C.Zachariah in which the population reached Five Billion when he worked as Sr Demographer at the World Bank.