Naseeruddin Shah was born on July 20, 1950, in the town of Barabanki, Uttar Pradesh, into the Nawab family.

Shah did his studies at St. Anselm’s Ajmer and St Joseph’s College, Nainital. He graduated with a degree in art from Aligarh Muslim University in 1971 and attended the National School of Drama in Delhi. 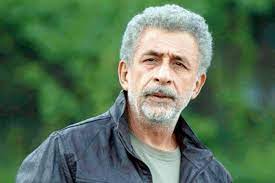 Shah started working in a regular Bollywood movie with the 1980 film Hum Paanch. In 1982, he starred in the film Dil Aakhir Dil Hai directed by Ismail Shroff, about Rakhee. One of his most important films, Masoom, was released in 1983 and was shot at St Joseph’s College, Nainital. His next major success in regular films was the 1986 film starring Karma starring veteran Dilip Kumar. Followers of films such as Ijaazat (1987), Jalwa (1988), and Hero Hiralal (1989) followed. In 1988,

he played the opposite of his wife Ratna Pathak as Inspector Ghote, HR F. Keating’s fictional detective in the English-language film Merchant Ivory The Perfect Murder. She has also starred in Aditya Pancholi in films such as Maalamaal (1988) and Game (1993).

He has acted in many Bollywood films with many stars, such as Ghulami (1985), Tridev (1989) Vishwatma (1992). In 1994, he acted as a villain in Mohra, his 100th film as an actor. He entered Malayalam cinema that same year, with a play by T. V. Chandran of Pontian Mada. The film depicts the absurd feud between a feudal serf (played by Mammootty) and a colonial landowner (played by Shah). He strongly believed that the distinction between art films and films had diminished considerably, especially since former filmmakers had also made commercial films. In 2000, Shah played Mahatma Gandhi in Kamal Haasan’s Hey Ram which focused on Gandhi’s murder from the perspective of the attacker.

Shah played Mohit, a drunken coach for a deaf and dumb boy in Iqbal. Shah was noted for his role in the 1999 Aamir Khan-starrer Sarfarosh, in which he played Gulfam Hassan – a ghazal-cum-terrorist mastermind – and in Neeraj Pandey’s A Wednesday (2008).

Shah has starred in overseas projects, such as Monsoon Wedding in 2001 and Hollywood’s acquaintance with The League of Extraordinary Gentlemen in 2003 (with Sean Connery), in which he played Captain Nemo. His presentation of Nemo was very close to the design of the graphic novel, although his Nemo was very absurd.

He has worked on Vishal Bhardwaj’s Indian adaptation of Shakespeare’s Macbeth, entitled Maqbool, in 2003, and Rajiv Rai’s Asambhav starring Arjun Rampal and Priyanka Chopra in 2004. He then went on to work on The Great New Wonderful (2005). Shah played a key role in Today’s Special, Aasif Mandvi’s 2009 comedy film. In 2011, Shah appeared in The Dirty Picture. He has starred in Anup Kurian’s play The Blueberry Hunt, playing marijuana in his jungle residence, and in Waiting, starring Kalki Koechlin, both released in 2016.

Shah made his first Pakistani film Khuda Ke Liye by Shoaib Mansoor, in which he played a short cameo. Her second Pakistani film Zinda Bhaag was nominated as the country’s official entry at the 86 Academy Awards for Best Foreign Language Film.

Shah has sung with his theatre group in places like New Delhi, Mumbai, Bangalore, and Lahore. He directed plays by Lavender Kumar, Ismat Chughtai, and Saadat Hasan Manto.

He has directed several plays written by prominent figures such as Saadat Hasan Manto, Ismat Chughtai, and Lavender Kumar.

Other forms of media and art

Naseeruddin Shah who played Pozzo in Motley’s production, Waiting for Godot at The Doon School, 2009.

In 1977, Shah, Tom Alter, and Benjamin Gilani formed a theater group called Motley Productions. Their first play was Samuel Beckett’s Waiting Godot, which was performed at the British Theatre on July 29, 1979.

In 1988, he starred in a television series based on the life and times of Mirza Ghalib, directed by Gulzar and broadcast on DD National.

In 1989, he worked as King of Maratha Shivaji in another television series called Bharat Ek Khoj based on Jawaharlal Nehru’s book The Discovery of India.

In 1999, he worked as a special agent for the Tarkash TV series on Zee TV. He played a retired agent plagued by nightmares as he apparently knew something about a horrible terrorist in some way related to his past. He played the villain through the double appearance of a ghazal artist and a Pakistani spy who supported terrorism in India in Sarfarosh (1999). He was the first of a few famous actors, playing the role of a series of popular children’s audiobooks Karadi Tales. He and his wife Ratna were fans of the film Paheli – the entry of the Indians to the 2006 Academy Awards.

In 2017, Shah returned to film, starring Shakespearean The Hungry, screened under a special presentation at the Toronto International Film Festival 2017.

In the 1970s, Shah met and fell in love with Ratna Pathak, daughter of Dina Pathak, a well-respected actress. During the 70s and 80s, they co-starred in several films, including Mirch Masala and The Perfect Murder. Shah and Pathak finally got married in 1982. By his second marriage, Shah has two sons, Imaad and Vivaan, both of whom are still aspiring actors. The couple lives in Mumbai with Heeba, Imaad, and Vivaan.