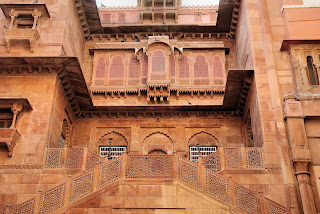 Lalgarh Palace in Bikaner within the Indian state of Rajasthan, built for Sir Ganga Singh, Maharaja of Bikaner, between 1902 and 1926. Laxmi Niwas Palace may be a part of Lalgarh Palace.

The palace was built between 1902 and 1926 within the Indo-Saracenic style. The building was commissioned by the British-controlled regency for Maharaja Ganga Singh (1881–1942) while he was still in his minority as they considered the prevailing Junagarh Fort unsuitable for a contemporary monarch. Ganga Singh decided that the palace should be named in memory of his father Maharaja Lall Singh.

Ganga Singh was legendary for his shikars (hunts) at his hunting preserve at Gajner, especially his Imperial Sand Grouse hunts at Christmas. As a result, the palace hosted many guests including Clemenceau in 1920, Queen Mary, King George V, Lord Harding, and Lord Irwin. Lord Curzon was the palace’s first notable guest.

Stanley Reed, the official reporter of the 1905-06 India tour of the Prince and Princess of Wales (later King George V and Queen Mary of Great Britain) noted that “The Laxmi Niwas Palace is that the most perfect modern building within the Indo-Saracenic style in India – a completely graceful pile of carved red sandstone, nobly proportioned and harmonizing entirely with its environment. Their Royal Highnesses haven’t been more splendidly housed since they landed in Bombay”.

In 1972, Karni Singh, M.P., the Maharaja of Bikaner, established the Ganga Singhji public trust. The Maharaja endowed a neighborhood of Lallgarh Palace to be utilized in service of the trust. Two wings were converted into independent hotels with the income from The Lallgarh Palace Hotel, a heritage hotel wanting to support the trust. Currently, Lallgarh

The complex was designed by British architect Sir Samuel Swinton Jacob. After a ritual blessing ceremony construction commenced in 1896 on empty land 5 miles from the prevailing Junagarh Fort on what’s now Dr. Karni Singhji Road. The palace was arranged around two courtyards with the primary and most impressive wing, Laxmi Niwas completed in 1902. The remaining three wings were completed piecemeal with the
final completion of the complex accomplished in 1926.

The palace was originally designed to cost 100,000 rupees thanks to the planned use of cheaper materials including the suggestion of using stucco rather than carved stone within the construction. Soon however all cost-cutting was abandoned and by the time of the completion of the primary wing the value had increased to 1 million rupees thanks to the utilization of the best materials including the widespread employment of finely carved stonework.

The Shri Sadul Museum is found within the west wing which also contains the fourth largest private library within the world. The museum is open from 10:00 AM to 5:00 PM on all weekdays except on Sunday.

In one wing was the private home of the Bikaner royalty.

The Lallgarh Palace Hotel. This is often a Heritage hotel owned and operated by the Maharaja Ganga Singh Ji Trust and marketed by Maharaja Heritage Resorts Limited under a Franchise and Marketing Services Agreement.

The Laxmi Niwas Palace. This is often a luxury hotel, owned by Golden Triangle Fort & Palace P. Ltd. The magnificent structure in red sandstone is one of the foremost popular destinations for tourists in Bikaner.