How will the COVID-19 global pandemic end? What are the possibilities? 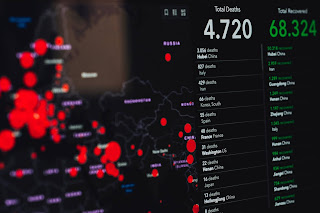 Should humans survive the variants, my back-of-the-envelope calculations rank its potential lethality above that of the Spanish Flu but below the plagues of the Middle Ages.
675,000 people died in the USA from the Spanish Flu. As of 22 May 2021, deaths from Covid-19 crossed 603,000 in the USA but experts at the University of Washington are claiming the number is 900,000 due to under-reporting.
Worldwide deaths reported by governments are 3.5 million but everyone knows that the number is closer to 7 million, perhaps much higher. The pandemic is just getting started. It will take a few more years to cross the 50 million worldwide death threshold established in the 1918 Spanish Flu pandemic.
The reported lethality in the USA and the world is essentially the same: 2.2% of those infected have recovered by dying as of 22 May 2021 (as I add this note). It is likely that worldwide deaths will pass 50 million during 2023 when infections are expected to accelerate as we sink deeper into the quicksand of a novel virus.
Although 10% of the people in the United States have been or are currently infected, only 2% of the world’s population has been or is currently infected.
Over 7 billion folks remain susceptible to infections. The overwhelming majority have no access to vaccines and won’t for several more years. By then, enough variants will have emerged and been circulating that it is possible they will overwhelm our vaccines and acquired immunities.
It should concern everyone that the USA seems hell-bent on creating conditions where variants, which are able to evade immunity and vaccines, can emerge. Such a catastrophe puts everyone on Earth at risk. An extinction outcome becomes more likely.
Humans are gullible, optimistic life-forms. People flocked to get on board the maiden voyage of the Titanic because they believed the hype that the steel behemoth was unsinkable.
Folks haven’t changed much since that horrible incident. Some people have been reported to be celebrating the end of the pandemic and burning their masks. Mass events are held in the USA on the “honor” system. The country is “opening up”.
People who claim to be vaccinated come and go as they please.
Humans are not invincible. Our survival is not certain.