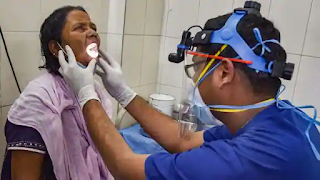 Black &Black fungus was recently announced as an epidemic in four states in India. Just a few weeks after the black fungus was terrifying people, reports of four cases of white fungus emerged in Patna. Reportedly, the white fungus is more dangerous than black fungus. Doctors have also warned that delay in treatment can lead to death and so they must be taken with utmost seriousness.
It should be noted that these fungal infections are not new. Both black and white fungus is caused by micromycetes.
What makes white fungus more dangerous is the fact that it has a grave impact on the lungs as well as other body parts. It can become lethal and may impact vital organs like the brain, respiratory system, digestive tract.
Mucormycosis or black fungus can affect the face, nose, eye orbit, and even brain, and can lead to vision loss. It can also spread to the lungs. AIIMS director Randeep Guleria blames misuse of steroids as one of the reasons behind its spread.
The white fungus attacks people who are immunocompromised, i.e.
They have low immunity. Unsanitary environments containing molds make people prone to catching this fungal infection. The disease is not contagious but another immunocompromised person can be at risk since these can be inhaled by a patient. Even diabetics, people suffering from cancer, and those on long steroid treatment are more at risk of catching white fungus.