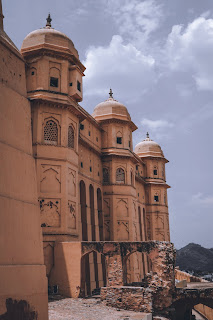 Mehrangarh, located in Jodhpur, Rajasthan, is one of the most important forts in India. Built around 1459 by Rao Jodha, the fort is situated 410 feet (125 m) above the town and is enclosed by imposing thick walls. Inside its boundaries, there are several palaces known for his or her intricate carvings and expansive courtyards. A winding road results in and from the town below. The imprints of the impact of cannonballs fired by attacking armies of Jaipur can still be seen on the second gate. To the left of the fort is that the chhatri of Kirat Singh Soda, a soldier who fell on the spot defending Mehrangarh.

The museum within the Mehrangarh fort is one among the foremost well-stocked museums in Rajasthan.

Rao Jodha, the chief of the Rathore clan, is credited with the origin of Jodhpur in India He founded Jodhpur in 1459 because the capital of Marwar (Mandore was the previous capital). He was one among Ranmal’s 24 sons and has become the fifteenth Rathore ruler. One year after his accession to the throne, Jodha decided to maneuver his capital to the safer location of Jodhpur, because the one thousand years old Mandore fort was not considered to supply sufficient security.

With the trusted aid of Rao Nara (son of Rao Samra), the Mewar forces were subdued at Mandore. With that, Rao Jodha gave Rao Nara the title of Diwan. With the assistance of Rao Nara, the inspiration of the fort was selected on 12 May 1459 by Jodha on a rocky hill 9 kilometers (5.6 mi) to the south of Mandore. This hill was referred to as Bhakurcheeria, the mountain of birds. consistent with legend to create the fort he had to displace the hill’s sole human occupant, a hermit called Cheeria Nathji, the lord of birds. Cheeria Nathji was a person with the local population as his followers and hence influential within the region. When requested to maneuver he refused categorically. This happened repeatedly. Rao Jodha then took extreme measures and sought help from another more powerful saint, the feminine warrior sage of Charan caste Shri Karni Mata of Deshnok. At the request of the king she came and asked Cheeria Nathji to quit immediately. Seeing a superior power he left directly but cursed Rao Jodha with the words “Jodha! May your citadel ever suffer a scarcity of water!”. Rao Jodha managed to appease the hermit by building a house and a temple within the fort. Seeing the influence of Karni Mata Rao Jodha then invited her to get down the inspiration stone of the Mehrangarh Fort and therefore the same was administered by her. Today only the forts of Bikaner and Jodhpur remain within the hands of Rathors, both had their stone laid by Shri Karni Mata. All other Rajput forts of Rajasthan were abandoned for a few of the opposite reasons by the respective clans. Only the Rathors of Jodhpur and Bikaner have their forts with them so far. This fact is taken into account as a miracle by the local population and is attributed to Shri Karni Mata. Rao Jodha also granted villages of Mathania and Chopasni to the 2 Charan warlords who were sent by him to request Shri Karni Mata to return to Jodhpur.

To ensure that the new site proved propitious; he buried a person of the Meghwal caste called “Raja Ram Meghwal”, who offered his services voluntarily, alive within the foundations as this was considered auspicious those days. “Raja Ram Meghwal” was promised that reciprocally his family would be taken care of by the Rathores. to the present day, his descendants still sleep in Raj Bagh, “Raja Ram Meghwal’s” Garden.

Mehrangarh (etymology: ‘Mihir’ (Sanskrit) -sun or Sun-deity; ‘Garh (Sanskrit)-fort; i.e.’ Sun-fort’); consistent with Rajasthani language pronunciation conventions, ‘Mihirgarh’ has changed to ‘Mehrangarh’; the Sun-deity has been the chief deity of the Rathore dynasty. Though the fortress was originally started in 1459 by Rao Jodha, founding father of Jodhpur, most of the fort which stands today dates from the amount of Maharaja Jaswant Singh (1638–78). The fort is found in the middle of the town spreading over 5 kilometers (3.1 mi) on top of a high hill. Its walls, which are up to 36 meters (118 ft) high and 21 meters (69 ft) wide, protect a number of the foremost beautiful and historic palaces in Rajasthan. Khandwaliya community one among the old traditional communities had the knowledge of breaking the large stones made this fort with others. 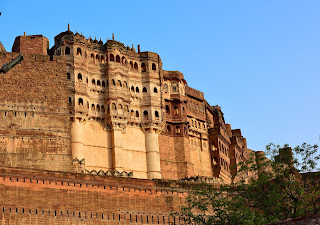 Entry to the fort is gained through a series of seven gates. the foremost famous of the gates are:

Jai Pol (“Gate of Victory”), built by Maharaja Man Singh in 1806 to celebrate his victory during a war with Jaipur and Bikaner.

Fateh Pol, built to celebrate a victory over the Mughals in 1707;

Dedh Kamagra Pol, which still bears the scars of bombardment by cannonballs;

Loha Pol, which is that the final gate into most parts of the fort complex. Immediately to the left are the handprints (sati marks) of the ranis who in 1843 immolated themselves on the pyre of their husband, Maharaja Man Singh.

Within the fort are several brilliantly crafted and decorated palaces. These include Moti Mahal (Pearl Palace), Phool Mahal (Flower Palace), Sheesha Mahal (Mirror Palace), Sileh Khana, and Daulat Khana. The museum houses a set of palanquins, howdahs, royal cradles, miniatures, musical instruments, costumes, and furniture. The ramparts of the fort house preserved old cannons (including the famous Kilkila) and provided a breath-taking view of the town.

The howdahs were a sort of two-compartment wooden seat (mostly covered with gold and silver embossed sheets), which were fastened onto the elephant’s back. The front compartment, with more leg space and a raised protective metal sheet, was meant for kings or royalty, and therefore the rear smaller one for a reliable bodyguard disguised as a fly-whisk attendant.

Palanquins were a well-liked means of travel and circumambulation for the women of the nobility up to the second quarter of the 20th century. They were also employed by male nobility and royals on special occasions.

This gallery displays one among the foremost important and best-preserved collections of fine and applied arts of the Mughal period of Indian history, during which the Rathore rulers of Jodhpur maintained close links with the Mughal emperors. It also has the remains of Emperor Akbar.

This gallery displays a rare collection of armor from every period in Jodhpur. On display are sword hilts in jade, silver, rhino horn, ivory, shields studded with rubies, emeralds, and pearls, and guns with gold and silver work on the barrels. The gallery also has on display the private swords of the many emperors, among them outstanding historical pieces just like the Khanda of Rao Jodha, weighing over 3 kg, the sword of Akbar, and therefore the sword of Timur.

The Turban Gallery within the Mehrangarh Museum seeks to preserve, document, and display the various differing types of turbans once prevalent in Rajasthan; every community, region, and festival having had its own head-gear.