The Construction Of The Fort Of Amer And Its Interesting History, 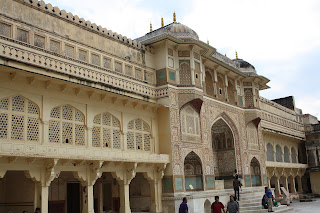 Amer Fort, built-in Hindu-Rajputana architecture, is one of the largest forts in Rajasthan, which is situated on the hills of Aravalli, about 11 kilometers from Jaipur. On the other hand, if we look at the history of Amer and the construction of this fort, then it is found that Amer had previously been the capital of the Suryavanshi kachwaha, which was built by a tribe called Meenas.
According to historians, this largest Amber Fort in Rajasthan was built by King Mansingh I in the 16th century. After which, for about 150 years, the successors and rulers of Raja Mansingh had expanded and renovated this fort.
After this, Sawai Jai Singh Secondary rule made Jaipur from its capital Amber in 1727, during which time Jaipur was recently established. Let me tell you that before Jaipur, the capital of the Kachhwaha (Maurya) dynasty was Amer. One of the oldest forts in India, the Amer Fort, formerly known as Kadimi Mahal, also houses the famous temple of Sheela Mata Devi, which was built by Raja Man Singh.
Some believe that this fort was named after Amber, Lord Shiva, at Ambikeswar. However, some people believe that the name of Amber Fort is derived from the name of Mother Durga, Amba.
In this most famous and grand fort of Rajasthan, during the time of different rulers, many historic structures were destroyed inside the fort, many new magnificent buildings were built, but despite facing many disasters and obstacles, today it is in Amer. The fort is enhancing the pride of Rajasthan and reminds us of a proud and rich history.

The unique architecture and structure of Amber Fort 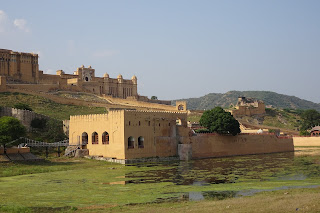 This huge fort of Rajasthan, located about 11 km from Jaipur, has been built in the Hindu and Rajputana style. Looking at this fort from the outside, it looks influenced by the Mughal architecture, while inside the fort is built in the Rajput architectural style. This fort is a unique example of Mughal and Hindu architecture. Photos of famous and courageous Rajput rulers of ancient architecture and history are also housed inside this fort. The historical palaces, gardens, reservoirs, and beautiful temples built inside this huge fort double its beauty.
In the Amber Fort of Rajasthan, tourists enter from the entrance to the east of this fort, this is the main fort of the fort, called Surpole or Surya Dardhar, the name of this shrine is derived from the rising sun in the east. . At the same time, inside this fort, a grand gate is also built in the south, which is known as Chandrapol gate. Jaleb Chowk is built right in front of this gate. From where the tourists enter the courtyard of the palace.
Let me tell you that Jaleb Chowk of Amber Fort was first used by the army to re-display the time of their war, which women could only see from their windows. Stairs are seen from Jaleb Chowk on two sides, on one side of which the steps lead to the Shila Mata Temple, the total goddess of Rajput kings.
This temple is situated in the sanctum sanctorum of this magnificent fort, which has its own historical significance as well as its own religious significance, while the tourists who come to visit the Amber Fort, surely visit this temple. At the same time, the staircase on the other side visible from Jaleb Chowk of this fort leads towards the Singhpol gate. At the same time, there is a very attractive structure near this Dhar, Diwan-i-Aam, where earlier the emperors used to hold a court for the general public, in which their complaint was heard. Ganesh Pol gate is located on the south side of this magnificent fort built of yellow, red sandstone, and marble stones, which is the most attractive and beautiful fort of this fort. In the gate, the finest carvings and superb craftsmanship have been done.
At the same time, a small idol of Lord Ganesha is adorned on top of this gate, so this fort of Amber Fort is called the Ganesh gate. Many of the historic and extremely attractive structures, including the Diwan-i-Khas, Sukh Mahal, Sheesh Mahal, remain inside this largest fort of royal design in Rajasthan. These structures of the fort also have amazing artwork.
Along with this, this magnificent fortress included in the list of World Heritage has a beautiful industry made of a char bagh style, which is making the beauty of this fort even more beautiful by spreading its natural shade. This oldest Rajputana heritage of Rajasthan is also connected to the Jaigad Fort through a tunnel route of about 2 km.

This tunnel was constructed to bring the families of the emperors to Jaigad fort in an emergency. The Jaigad fort and it is surrounding overlook a beautiful view from this fort. One of the most important and famous fortifications of Rajasthan, a large number of tourists visit the beauty and grandeur of the Amer Fort.

Diwan-i-Aam is very special among the historical and important structures built in the complex of this huge fort situated on the Aravali hill of Jaipur. It was built by Raja Jai ​​Singh. The Diwan-i-Aam was built for the general public, in this grand hall, the problems of the common people were heard by the emperors and are resolved. This particular historical structure has been carved with very finely carved columns with glass mosaic work. There are 40 very attractive pillars in this hall, some of which are also of marble, while there are precious stones attached to this pillar. Sculptures of different very beautiful paintings are carved on the stones of this special historical building.

There is a very beautiful Sukh Niwas built in front of the Diwan-i-Aam inside this huge fort of Rajasthan, which is one of the main attractions of this fort. The doors of Sukh Niwas are of sandalwood, decorated with elephant teeth.

The Sheesh Mahal inside this huge fort of Amer included in the list of World Heritage is one of the major attractions here. This palace is made up of many beautiful mirrors. The Sheesh Mahal has been built in a very unique way, when some light rays fall inside the Sheesh Mahal, then the entire hall lights up. The special thing about Sheesh Mahal is that only one candlelight is enough to publish it.

Ganesh Pol is also one of the main historical structures built in this huge fort of Amer. Ganesh Pol is situated on the south side of Diwan-i-Aam built inside the fort. Ganesh Pol was built by Raja Jai ​​Singh Ddhitiya from about 1611 to 1667 AD. Ganesh Pol is one of the 7 very attractive and beautiful walls made of this huge fort, which is considered the pride of Rajasthan. It is also said of this magnificent fort that, when any emperor came to win a war, entered through this main fort of the fort, where This archaic gate of the fort is decorated in a very magnificent way, in this top a small statue of Lord Ganesha is installed in the upper part, due to which it is called Ganesh Pol. kings were welcomed with a rain of flowers.

Naubatkhana was built on the top floor of this fascinating pole, in which many musicians and instruments were played including dhol, engage, and tabla.

Dil Aram Bagh, built inside this largest fort of Rajasthan, is increasing the beauty of this fort. This magnificent garden was built around the 18th century. Beautiful ponds, fountains have been built in this delightful garden. Everyone gets mesmerized by seeing the beauty of Dil Aaram Bagh. Its delightful attractiveness is relaxing the heart, hence it is named Dil Aram Bagh.

A famous Shila Mata temple is located inside this huge fort of Rajasthan. This temple was built by Raja Man Singh. This arched temple is built using white marble stones. It is said that the great king Man Singh brought the idol of this temple from the bungalow. While some people also believe that when Kedar Raja married his daughter to Maharaja Mansingh, he also gave this idol to them. Currently, thousands of devotees have their faith attached to this temple located on the premises of Amber Fort. People come from far and wide to visit this temple. It is believed that in this temple, all the wishes of the devotees sought with the true mind are fulfilled.

Diwan-i-Khas is also one of the major historical structures and attractions of this grand fort. This picturesque structure was mainly built by the guests of the emperors, in which the emperors used to meet their special guests and ambassadors of other kings.

This largest Amber Fort in Rajasthan was built by King Mansingh in the 16th century. This huge fort was named after Amba Mata.
This unique structure built from Hindu and Mughal architectural styles was included in the site of World Heritage by UNESCO in 2013 due to its grandeur and attractiveness.
One of the most important forts in India, the important structures built in the premises of this Amer Fort include Sheesh Mahal, Diwan-i-Aam, Sukh Niwas, etc.
This huge fort located near Jaipur was built specifically to house the Rajshahi family. Sheesh, Mahal is the most prominent among the historical structures built in the premises of this fort. Also known for its amazing carvings, the Sheesh Mahal is also considered to be the finest glasshouse in the world.
Amer Fort, located about 11 km from Jaipur, used to be the capital of the turtles several centuries ago, but after the establishment of the city of Jaipur, the newly constructed city of Jaipur became the capital of the kachwaha.
There is also a grand building named 27 Kachehri inside this huge fort of Amer, which is one of the major scenic spots here.
One of the important forts of India, in front of the fort of Amer, is also a very beautiful and attractive lake called Maota, which is further enhancing the beauty of this fort.